There are already five mtu engines in the subway machine rooms of Vienna. A sixth motor is to be added next year. This is currently being processed by K&W Drive Systems in cooperation with the electrical engineering company ELIN into an emergency power system ready for operation and should be ready towards the end of the year. 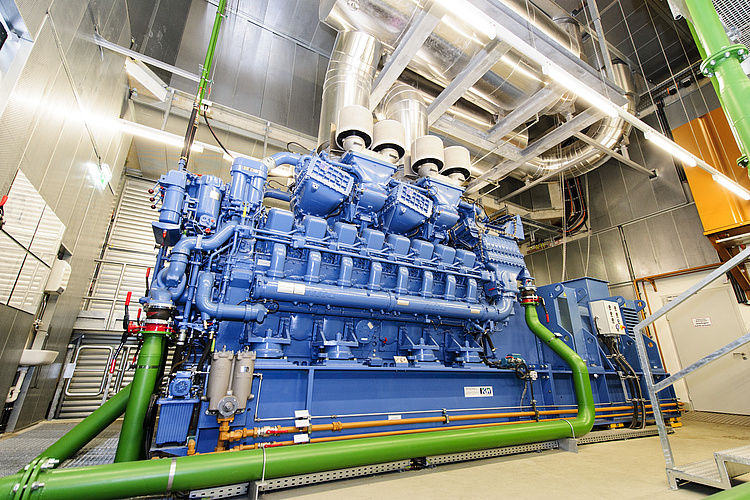 Green mobility in major cities also includes subways. These are being extended in many cities - including our federal capital Vienna. The new U5 line is currently under construction: New, underground stations are being built to give even more Viennese access to their subway. To ensure that the lights never go out at these stations and that people can leave them safely even in the event of a power failure, five and soon six emergency power generators with mtu motors are on standby.

An mtu Series 956 unit is an imposing sight. Stand next to it and its sheer proportions – 3 m high, 5 m long, 2 m wide and 21.5 tons in weight – make you feel like you're looking up at a giant. “Sure, it's a huge engine, but in terms of the output it's capable of it's pretty compact,” pointed out Giovanni Coiro, Sales Manager Power Generation at Rolls-Royce Power Systems. That output is 5,000 kW, which, spread over 16 cylinders, means the 956 engine boasts an incredible power-to-weight ratio. “Exactly the reason we want such engines in our emergency generator sets,” said Gerald Leutgeb, head of the Electrical Plant division of Wiener Linien, Vienna's public transport operator.

30,000 kilowatts for safe evacuation of stations

Together, the generator sets will be capable of delivering 30,000 kW of power to keep lighting installations, escalators, control and signaling systems and information systems fed with energy should the public power grid fail. Lifts, for example, will move to a predefined level and open their doors automatically to allow passengers to exit while the station lights remain fully on. All this ensures that people are safely evacuated from the underground, after which the metro stations can be closed. To supply enough electrical power to each underground station, up to 2 MW is required pro service line. That not being enough to operate the trains themselves, these come to a standstill in the event of an outage, with only certain units staying operative to bring passengers to the next station for their safe evacuation.

Most engines installed in emergency gensets hardly ever need to go on stream. But when the case does arise, they have to be able to step in immediately – in Vienna, the mtu engines can ramp up to maximum power output in less than ten seconds. To check that they're always operational, test runs are performed on a monthly basis, giving the engines the opportunity for a few hours to show their capabilities. “We've been lucky enough never to have suffered a serious power outage,” reports Gerald Leutgeb. “But if it does happen, I have 100% faith in the engines.” And if there does happen to be a hitch at one of the gensets, the others can switch in, since all six are connected. In other words, if one generator set fails or is being serviced, the others can come on stream.

All of which means that the Vienna metro's many passengers can relax in the knowledge that they will always be able to exit the underground safely should the mains power be disrupted.